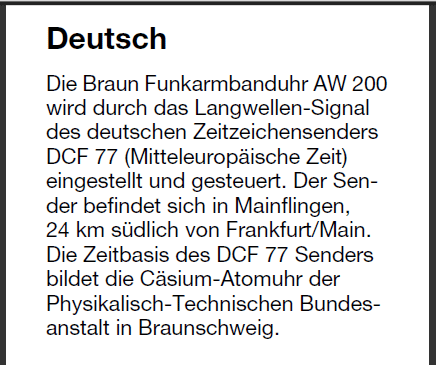 I recently acquired a German wrist-watch from the early 2000s that calibrates itself according to an atomic time that is broadcast nightly by a radio-tower outside of Frankfurt am Main. The body of the watch contains no dial with which to set the hands. The activity of regulating the watch is completely administered from without. Between 2:00am and 3:00am the hands move automatically, ever so slightly, and find a perfect consonance between themselves and the near-perfectly regulated disintegration of a cesium atom across the ocean. The watch pushes stereotypes about German people and German design past caricature and in to the domain of farce.

Wondrous, remarkable and strange. Yet a technology that has been wholly outmoded in a short matter of years. With the advent of mobile communications every phone and pocket device can be coordinated according to an objective standard of time such as an atomic clock. The cumbersome (albeit beautiful) act of grabbing world-time from a long wave radio signal is rendered obsolete by the invention of cellular towers and the adoption of microwave signals as a dominant mode of information-synchronization. The AW 200 harkens back to a pre-network moment of ‘global coverage’, when the only thinkable way of covering the globe was radio transition from a single point, as opposed to tens of thousands of linked cellular towers. The watch is a novel piece of material history because in its perfect way of locating itself in time, it becomes altogether untimely (ana-chronistic).

There is a world-picture insanity in the principal of the AW 200. As regulated and predictable as the motion of conventional watches may be, the ability of users to set them connects to a nostalgic moment of provincial technological life. I set my watch fast to make my appointments five minutes early. You set your watch five minutes slow so as to take things with their deserving grain of salt. My watch becomes ‘unwound’ over the year, but somehow, like a pair of well worn jeans, I take comfort in its constitution in the domain of the ephemeral.
The AW 200 displaces the ephemeral disintegration of human products every night. Its invention is the consequence of the advent of the age of the world picture. A world in which there is any reason to establish atomically precise synchronization between actors across the surface of the globe is a world in which the self has been abstracted from ‘humanistic’ modes of relating into globalized modes of relating. The global is post-human.